Pianist Hélène Grimaud featured in the NY Times, plays sold out show at LPR on Monday 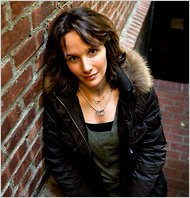 Interviewed over lunch on Tuesday, Ms. Grimaud spoke of her recent recovery from another, unrelated series of dire medical issues — a tumor discovered to be stomach cancer, leading, after a delay caused by a bronchial infection, to surgery and chemotherapy — and of another Deutsche Grammophon album, “Resonances,” a program of solo works by Mozart, Berg, Liszt and Bartok, released that day.

It’s called taking the bad with the good. Yet Ms. Grimaud, looking and sounding hardy at 41, was nothing but upbeat.

“I have never felt so good,” she said.

And that is fortunate, for she is up to her old scheduling. Ms. Grimaud, who now calls Weggis, Switzerland, near Lucerne, home, is in New York to play music from the “Resonances” program in the Peoples’ Symphony Concerts series at Town Hall on Sunday afternoon and at Le Poisson Rouge on Monday evening (and — oh, yes — to visit the Wolf Conservation Center in South Salem, N.Y., which she helped found in 1999). Her itinerary since December has included Moscow and St. Petersburg, Beijing, San Francisco, Tokyo and Toronto, in that globe-hopping order.

Ms. Grimaud plays at LPR on Monday night. I hope you have your tickets already, because this show is sold out.