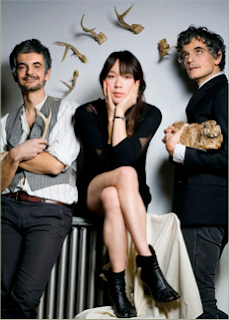 Following their preview of Penny Sparkle at New York’s 92Y Tribecca, Blonde Redhead have offered up another glimpse of what to expect from the forthcoming record – released worldwide on September 14 – in the form of “Not Getting There”.

The track is now available to host and download from the widget below and showcases the sublime pop sensibility of the album, itself assembled over the last year between New York and Stockholm with production duo Van Rivers and The Subliminal Kid (Fever Ray, Glasser), Drew Brown (Beck, Charlotte Gainsbourg, Radiohead) and mixed – as with their previous record, 23 – by Alan Moulder (Depeche Mode, My Bloody Valentine, Yeah Yeah Yeahs).

DOWNLOAD ‘NOT GETTING THERE’ BY CLICKING HERE
(le) poisson rouge will be celebrating Blonde Readhead’s Penny Sparkle with a listening party on September 14th. Details here.
SHARE THIS