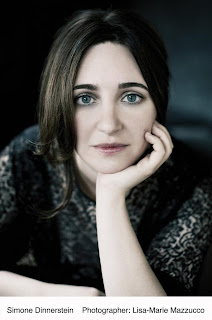 American pianist Simone Dinnerstein has fast been gaining international attention since making a triumphant New York recital debut at Carnegie Hall’s Weill Recital Hall in 2005, performing Bach’s Goldberg Variations. Recent and upcoming performances include Ms. Dinnerstein’s recital debuts at The Kennedy Center for the Performing Arts and the Vienna Konzerthaus, the Lincoln Center Mostly Mozart Festival, the Aspen and Ravinia festivals, in Cologne, Paris, London, Copenhagen, Vilnius, Bremen, Rome, and Lisbon, and at the Stuttgart Bach Festival; as well as debut performances with the Dresden Philharmonic, Czech Philharmonic, New Jersey Symphony Orchestra, the Orchestra of St. Luke’s, Kristjan Järvi’s Absolute Ensemble, the Baltimore Symphony, the Atlanta Symphony, and the Minnesota Orchestra. Last year she performed on the People’s Symphony series at Town Hall and on Lincoln Center’s Great Performers series in New York, and this year she will perform her third recital at The Metropolitan Museum of Art. In July 2009, she will make her debut with the New York Philharmonic at Lincoln Center’s Avery Fisher Hall. 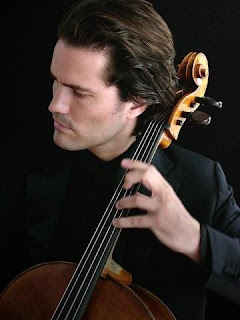 ZUILL BAILEY is considered one of the pre-eminent cellists of his generation. His rare combination of compelling artistry, technical finesse and engaging personality has secured his place as one of the most sought after cellists today.

A consummate concerto soloist, Bailey performs with the symphony orchestras of Chicago, Dallas, Ft. Worth, Louisville, Milwaukee, Minnesota, San Francisco, Toronto and Utah, among other leading orchestras around the world. He has collaborated with such conductors as Itzhak Perlman, Alan Gilbert, Andrew Litton, Grant Llewellyn, James DePriest, and Stanislav Skrowacezewski and has been featured with musical luminaries Leon Fleisher, the Julliard String Quartet, Jaime Laredo, Lynn Harrell and Janos Starker. In his New York recital debut, Bailey performed a sold-out performance of the complete Beethoven Sonatas at the Metropolitan Museum of Art. In additon to other major venues, he has appeared at the Kennedy Center, Alice Tully Hall, the 92nd St. Y and Carnegie Hall, where he made his debut performing the U.S. premiere of Miklos Theodorakis’ Rhapsody for Cello and Orchestra.

Find out more about these artists here.