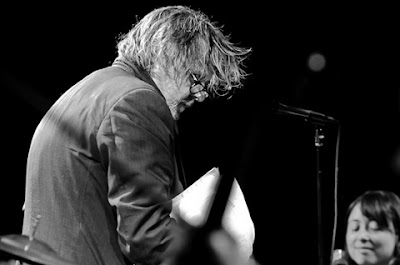 The world premiere of Glenn Branca’s Symphony No. 15 has now passed. But you can still order a copy of the recording through our Kickstarter Project. If you missed the show, I recommend you get this limited edition vinyl, because it was a great performance. For evidence, see below. The New York Times review of the show, great photos from Brooklyn Vegan, and an interview from Daily Swarm about the symphony.

And then came the fifth movement, after which Branca scholarship will never be the same. Instrumentation included walkie-talkies, bird whistles, writing pads, harmonica, iPhone and paperback books, which various musicians opened and appeared to read. At one point Reg Bloor, one of the guitarists, blew into a trumpet, without skill; at another point she opened a beer bottle next to a microphone and took a sip.

It all came from far more antic and open-ended corners of new music: game pieces, chance operations, unlikely instruments, absurdism. Mr. Branca generally works with fixed elements, snaps them in place and creates music that envelops you. But this felt random, unmoored and completely thinky. Blindfolded, I’d never know it was Mr. Branca’s. I wouldn’t guess he’d like it if he heard it. Maybe he didn’t: he left his conductor’s perch until it was over.

But he pushed forward by integrating. In the last movement, the seventh, here were bells and water glasses again, pennywhistles and recorders and tambourines. Then the pulse tromped in, the guitars returned, and a menacing, strummed bass chord, rumbled over a snare-drum march rhythm. The music built up into sliding, harmony-blurring figures, revving up your capacity to feel again.