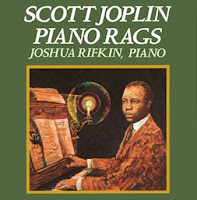 On January 30th Joshua Rifkin will make his debut at (Le) Poisson Rouge performing the music of kindred spirits J.S. Bach and Scott Joplin in celebration of the 40th anniversary of the album.

Nonesuch Records has made this recording of Scott Joplin’s “Maple Leaf Rag” available as a free download for a limited time (it’ll be taken down following the Jan. 30th performance). Take a listen, and if you like you can pick up the album here.