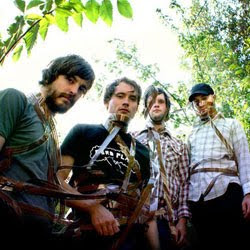 Holy F—‘s upcoming release ‘Latin,’ was recorded between tours in a converted barn in rural Ontario. The band began tracking back in 2008 and had an album in the can over a year ago, but decided to extend sessions to capture new songs and revised versions of tunes such as ‘P.I.G.S.,’ the-four-and-a-half minute juggernaut that serves as the album’s finale.

“We did a version we thought was pretty good, but when we went out on tour it sounded better,” Borcherdt explains. “We were like, ‘f— it, let’s do it again.’ It’s the first time we ever re-tracked a song, and it defines the greater effort we put in.”

You can read the rest, and stream the album in its entirety, over at Spinner.

Holy Fuck performs at LPR on May 28th. Get tickets here!